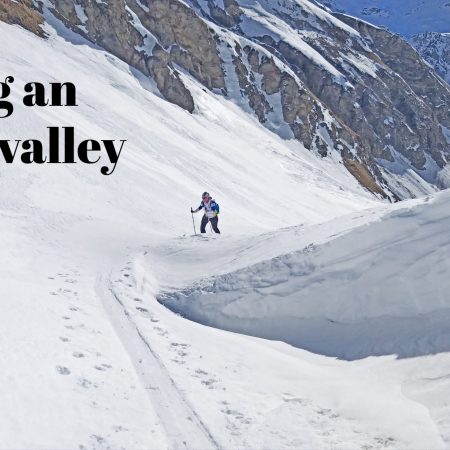 Our aim for today was to discover a new valley in the Austrian Alps. Driven by more than one recommendation from locals we borrowed a friend’s car and headed for the specified spot, not far from our current headquarters in Heiligenblut, Carintia.

The car ride itself was far more adventures than we could have bin imagined, as the narrow and steep road put Diana, on a challenge to keep the car at a steady speed and struggling not to lose grip on the ice parts of the road. The interesting part was that the road was so narrow that only one care could fit and the turns where so sharp that we could expect at any moment to bump in the descending traffic with no room to avoid a frontal collision. For this, we drove not faster than 20km/h and just hoped for the best. Eventually, we just met one car on the ascent and managed to avoid any inconvenience. With some adrenaline to spare we arrived at the Astentaal Parking spot at a cosy inn. Already we figured out that we are at the right spot since the parking lot had more cars that obviously were here for the same reason, only far more early than us.

Beeing this late in the 2000m are on old snow ( it did not snow for several weeks now) actually was a good idea for us, since we did not have the ice crampons ( German Harscheisen ) with us, and in the early and iced snowpack would have been more than a struggling challenge for us. We noticed after we started the ascent on skins and left the shadow of the mountain, that the icepack was changing and the snow began to be softer and allowed more grip for our skins.

I did one big mistake, that is normally not allowed in an unknown mountain area, I forgot to load my phone with the local area and the track. Also, I did not have a lot of battery left on my mobile. I know I have to always have not only the backup of battery but also all the information regarding the are. The great weather and the fact that it seemed like a well known and popular ski area, numbed my common sense. Nevertheless, we saw a lot of ski marks and figured we would not get lost. For the record: this is normally a very bad idea and I knew it also back then.

As we started and realised how bad the ice was frozen we realise there is a good possibility that we will not get very far today. We saw a lot of ice crampons marks, the skier in front of us used this special equipment and obviously not just for fun. We pushed until we got into the sunny side of the valley and planed to see from there what to do. The Luck fortunes the brave this time and the snowpack heated by the unusual January sun gave up under the heat, allowing our skins to get the necessary grip in order to keep going.

Soon we realised that our ally, the sun was also two-faced since the ascent from 2200m on the brutal heat in the iced valley put a lot of heat pressure on us. Our less den 1 L water supply was a bad joke in these conditions.

Driven by our curiosity we ignored this discomfort and climbed on our skins further. After a while, the narrow valley gave place to a much larger glacier valley with white faces dominated by transported snow. This was a ski paradise, all you could see with your eyes, there were rideable lines.

Since the road put us under so much pressure we set a time for ourselves at which we would descent no matter what, in order to get to drive down the mountain during daylight.

For this reason, we did one mature gesture, and the only one for today, and did not push until the summit or a top of the line but decided to return.

The descent was beautiful and put all our experience to the test. We hit different snow types, starting from packed snow to resembling powder, to ice shells, hardened ice and some melted heavy snow near the bottom.

We went down near one giant crevasse built by an old avalanche, went over a snowed bridge and into the house area of the valley where we could enjoy a nice Radler and a Coke before descending trough the narrow and slippery road back home.